Kristina is the co-inventor of the award-winning innovation BLITAB® – the first tactile tablet for blind and visually impaired people. The technology creates tactile braille and graphics by using smart micro fluids to develop small physical bubbles instead of a screen display. The Blitab converts any document into Braille. You can plug in a USB flash drive or connect to Wi-Fi. The tablet surface displays little dots, called “tixels” (from “tactile pixels”). Users can read a full page of text at a time. The tablet can also convert images by triggering dots that present the picture in 3D. The revolutionary device promises to improve the social wellbeing and digital inclusion of people who may have had difficulty accessing the digital world until now. 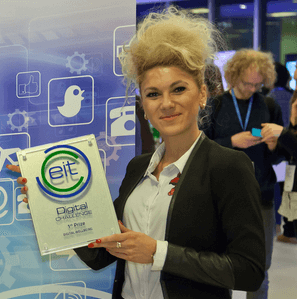 BLITAB as a start-up has won 11 international awards in just a few months!

Kristina has recently successfully showcased her innovative tablet at CES in Las Vegas where it was cited by the BBC as one of the show’s biggest launches. Blitab was also named the World’s Most Creative Startup in 2015 and was also European Winner of the Social Entrepreneurship and Disability category. Kristina graduated from Bulgarian University of Technology and moved to Vienna in connection with the launch of her start-up. The Austrian Ministry of Economy provides considerable support to social enterprises and Blitab was immediately granted €35,000 to launch the start-up.

The European Institute of Innovation and Technology (EIT) and the European Center for Women and Technology – ECWT have started collaboration around getting more women to launch their technology to the market and to start up their own enterprises. ECWT will be continuously reporting about EIT activities and milestones of this collaboration.